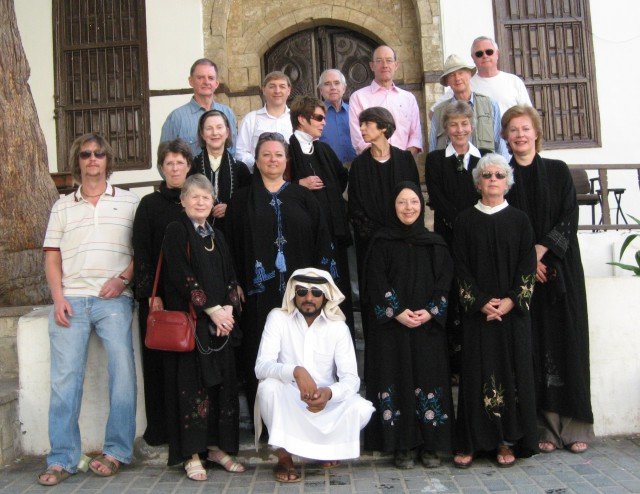 The Saudi-British Society organised its first tour of the Kingdom from 30th October to 7th November 2009. This was arranged through the Traveller agency in London and Sadd al Samallaghi in Saudi Arabia. The tour leader was Ionis Thompson, the Society’s Hon. Secretary, and the tour manager was free-lance archaeologist Iain Shearer. Our wonderfully energetic and efficient tour guide, Badr al Faqir, made all the plans and arrangements work smoothly.

The tour started in Riyadh, with a morning in Diriyyah, the old capital of the al Saud, currently closed to the public for extensive renovation work, but Badr found a way in and round the site and showed us some of the new excavation and restoration that has taken place.

There is a new Visitors Centre on the wadi bank opposite the old main entrance, which excellently explains the history of the town. In Riyadh we had lunch in a relaxed arab-style restaurant and then visited the second-highest building in Riyadh, the Faisiliah tower, whizzing up to the top for views over the whole city, after which we were taken to the Musmaq Fort, now a museum to the life of King Abdulaziz and to the creation of the modern state of Saudi Arabia.

The following morning was spent in the National Museum and the restored area round the old Murabba Palace: the palace itself was closed to the public but we were able to see the museum attached to it which contains items used by King Abdulaziz including his collection of Rolls Royce and other cars. The group were very impressed with the collection in the pre-Islamic section of the museum. Unfortunately time did not allow us to see all the collections on display in other parts.

From Riyadh we flew to Sakkaka al Jowf and drove from the airport to the standing stones of Rajjajil, which date from the 4th millennium BCE.

This interesting place is unique in Arabia or elsewhere: 50 clusters of slim carved standing stones, usually 4 but sometimes more, some as high as 9 feet, stand on a rocky terrace facing the rising sun. Not far from this site is the castle where Lady Anne Blunt and Sir Wilfrid Blunt stayed in the 1870s, Qasr Zabal. Rebuilt from a much older castle, it is heavily restored and stands on a little mound, opposite which is a fine example of a Nabataean well carved deep into the rock, Bir Saisir. That evening in Sakkaka we had the opportunity of visiting a local family, the women meeting the girls of the family who were studying English at university, and the men with the male members of the family. The group felt this greatly enhanced their understanding of the people of the country we were visiting.

The following morning we had an early visit to Qasr Marid and Mosque of Omar in Domat al Jandal, the ancient name of the other town in the area of al Jowf.

Qasr Marid has peaky towers under reconstruction and stands on a mound which has been found to have roots dating at least from the 3rd century BCE, when the Nabataeans controlled the town. The mosque is said to be the third oldest in Islam and has an unusual minaret. From Domat we had a rather long day’s drive to al Ula via Tayma. Although a German team of archaeologists are currently excavating in Tayma there is little to see and their dig sites are fenced off. We did visit an ancient well, Bir Hajjaj, said to date from 1000 BCE and still with a little water in the bottom.

We stayed in al Ula for 3 days, which gave enough time to spend a whole leisurely day exploring the tombs and places of ritual activity in Madain Saleh, the highlight of our trip.

Since this site has been awarded UNESCO status as a place of outstanding historical importance, its appearance has been much improved with the removal of little metal steps which used to give access to some of the higher tombs. It is a wonderful place which repays time spent walking round the sandstone jebels in which the Nabataean tombs have been built, and, as ever, there were hardly any other tourists. A French-Saudi team is currently excavating here but do not arrive until January 2010. We were treated to lunch in the garden of Badr’s father’s farm just outside the ancient site, a beautiful place where we sat on carpets under palm trees. Later we finished exploring the site and ended by seeing the sun glow on the gold face of the lone tomb known as Qasr Fared.

The following day we explored the restored station of the Hejaz Railway in Madain Saleh. The Supreme Commission of Tourism hopes to make the station buildings into a tourist resort and they would seem ideally suited to this. We also explored mediaeval al Ula, which has been partially restored to show what life was like in the flourishing period of its prosperity as a stopping point on the pilgrim route to Makkah. The maze of streets show how use was made of the stone from the ancient nearby town of Khuraibah. In the afternoon we were taken by 4-wheel drive vehicles into some of the rocky canyons of the Jebel Hejaz near al Ula, and to the curiously shaped “mammoth” rock.

Badr took us to an area where all the rocks are covered in rock art, some obviously much more modern than others, which, by analogy with elsewhere in the Kingdom, might be several thousand years old. Then we saw sunset from a height above the al Ula valley.

The next day we left al Ula for Medina, calling at 2 stations of the Hejaz Railway en route.

Badr tried to take us into the centre of Khaybar town but suspicion of foreigners persists and he failed in this. We had a picnic lunch beside the great Khaybar dam in a charming spot under acacia trees, beside a small pool of water in which a young camel was drinking.

We reached Medina in time for tea in the Meridien hotel before our flight to Jeddah, and a slight set-back when Badr and I were bumped off the over-booked pre-Hajj flight. We were able to follow shortly after the others, who had dinner in a restaurant on the Corniche popular with local families.

Jeddah Old Town was quite empty the next morning, but we managed to get inside the Beit Nassief.

This is the best preserved of the old merchant houses of Jeddah and now a museum, with the most enormous underground cistern and a wide ramp which enabled camels to take provisions up to the kitchens on the top floors. In the afternoon we had a delightful cruise up and down the Creek, in the balmy warmth of a November Friday afternoon when the people of Jeddah were relaxing on either side of the water.

On the following day we had time to visit the private museum of Abdul-Raouf Khalil which has a collection of Islamic artefacts and a lot of interesting ethnographic material, before departing for the airport.

I think I can say that all of the group appreciated this glimpse of the Kingdom’s history and people and we all felt quite privileged to be there in the early days of tourism to Saudi Arabia: in fact we were the only group from UK visiting in 2009. We hope to plan another such trip in early 2011, with possibly a follow-up tour to the South-West of the Kingdom, including the Farasan Islands.