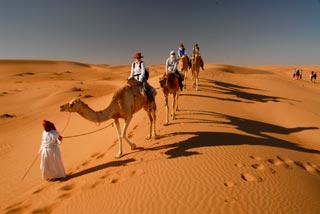 The Society has supported Connecting Cultures since its inception. Its initial participants were from Saudi Arabia and the UK; now they are from various Middle Eastern countries and from the UK. There is more on their website www.connectingcultures.co.uk.

Established in 2004, Connecting Cultures is a unique educational initiative that promotes face to face dialogue with young people from the western and Arab world via short wilderness journeys. The aim of this dialogue is to celebrate cultural diversity, break down stereotypes, identify shared values and in so doing promote understanding and help reduce the polarisation of cultures. Based in the Sultanate of Oman, Connecting Cultures works in partnership with governmental, corporate and charitable sectors. It is endorsed by UNESCO and works to support the key aims of the United Nations Alliance of Civilisations. DHL are the main corporate sponsors of the Connecting Cultures programme.

2008 saw two Connecting Cultures journeys take place in Oman, once again kindly supported by the Saudi–British Society. The first, for 18 girls, involved 5 days in the Sharqiya Sands in early February, using camels for transportation. The boys journey took place in early April on the mountains of Jebel Akhdar, following old donkey trails on foot at an altitude of 5–6,000 feet.

Both events were formally endorsed by the director general of UNESCO, and worked closely with the EU office in Riyadh to support the European 2008 Year of Intercultural Dialogue. The quality of debate was outstanding, and the media coverage once again extensive; the girl’s event reached out to 15 million people via the press, and BBC News On-line covered the event via an image diary. http://news.bbc.co.uk/2/hi/in_pictures/7247342.stm

I learnt that the world and its people make excuses to avoid cultural connection by using “language barrier” among others as a means to not even try. In this expeditions group we had translations being given back and forth. And even when there was none, communication channelled across without the need of verbal words. An exchange can be made and understood by the use of something as simple as a smile.

Happiness can be found in the simplest form of sharing a silent moment with a new friend watching the sunrise across a desert’s horizon. Happiness is not materialistic in any form, it’s the joy of experiences and people’s kind hearts. We had all left the real world’s necessities behind, only to realize that life’s necessities aren’t what we thought they were instead it is the necessity of life which is more needed to be addressed. Too many things are taken for granted and we miss out on the necessity of life and living with pure joy.

Religion, whether Islam or Christianity is a beautiful gift when not corrupted. I have personally never been a particularly religious person and have often held the view that without religious beliefs the world would be a far simpler and more peaceful place. However, after talking to the Muslim girls about their faith and watching them pray together, I envy the unity and peace they all seem to have. I now strongly believe that if the core principles and practices of all faiths could be discussed and taught in school then misunderstandings and fiction would be reduced.

The importance of basing an opinion on knowledge and correct facts. Cultural misconception is endemic in todays world. I came to Oman with a vague idea about all of the countries that were participating. However, as I learnt more about the girls, their customs and countries, I have come to realize what little knowledge I had built my opinions on. In the future, I hope I will be less inclined to have opinions unless, to my knowledge, they are very informed.

In my opinion, a program like “Connecting Cultures” has helped me to understand better the people from the Islamic world. Because of many different reasons that we have discussed, it seems that there is a misunderstanding between cultures nowadays. This journey has made me see the real faces and voices of Middle East people, and I can say right now that they’re quite different of the news about this region that we watch in our western media. Because of that prejudgment, I wasn’t sure about the good understanding between all of us in this journey. Now, when this incredible experience is about to finish, I leave Oman with a very good feeling inside. I’ve witnessed wonderful debates these days. In some of them we reached agreements very quickly. In others, however, our opinions were further and the debates more passionate because of that, but always knowing that we are concerned with the same things: peace, justice, happiness, among others. I see how the lack of communication is one of the fundamental problems of our days, and knowing that, we have tried to communicate as much as possible between us to break down these walls who separated us.

When thinking in more concrete knowledge. I’ve learned more of the Arabic religion and language, both of them so interesting to me. The Arabic people have explained us more about their political system that was kind of unknown to me. And also, it was very interesting to hear them when we speak about us, the western, because it can help us to understand better our own society.
Santiago Lozano Lopez – Spain